Today was a very special day for me. Emmanuel Music premiered my newly commissioned motet, Magnificat, during the service for the third Sunday in Advent at Emmanuel Church in Boston. As a long time member of the congregation and former sexton at Emmanuel, it was a dream come trueThis setting of the Magnificat seeks to tap into the great joy inherent in this canticle, and is structured as an introduction to J. S. Bach’s cantata Ärgre dich, o Seele, nicht (Do not be confounded, O soul), BWV 186a. You can here it here (at 19:10 and before the cantata at 1:22:10): Magnificat.
Tonight in the Cube at Virginia Tech Sarah Plum is playing my piece LUNE for violin and electronics as part of their Music and Technology Festival. She’s also playing some other amazing pieces by Eric Lyon, Kyong Mee Choi, Randall West, Charles Nichols, Joo Won Park, and Mari Takano. It’s been a joy revisiting this piece with her, would that I could be there for the performance. 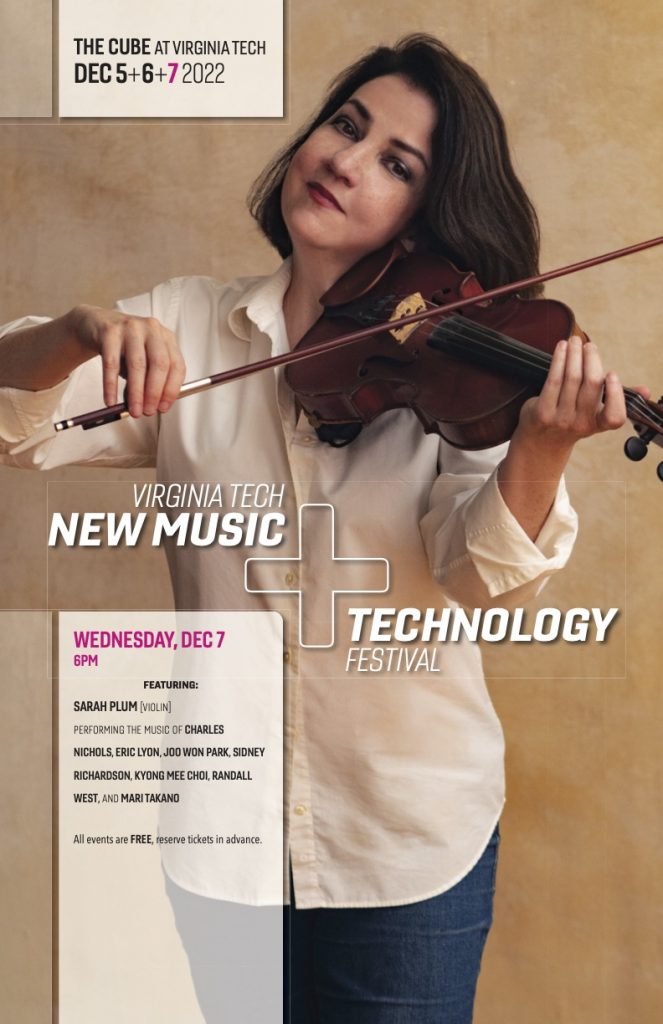 I am thrilled to be an inaugural artist-in-residence at the Longy School of Music at Bard College. I am developing a new work there over the next two years based on H.D.’s epic poem Helen in Egypt with the mentorship of composer Amy Beth Kirsten. It’s been a thrill to get to know the amazing faculty and student composers at Longy, and to work alongside my fellow artists-in-residence Bahar Royaee and Sam Wolf. On the 28th, we shared our works-in-progress with a guest artist, stage and movement director Elizabeth Margolius, in the first of four Claiming Space events that will take place during the residency. More information about this exciting new program can be found here: Longy AIR.

This has been a busy month for performances, and I was overjoyed to have several of my own works programmed this October. On the second of the month, the TEMPO Ensemble at California State University, Northridge, performed my Pierrot piece Tarot Teller, which was inspired by Nathaniel Mackey’s poem from Eroding Witness. A video of the performance can be viewed here: Tarot Teller.

On my thirty-fifth birthday, I had the pleasure of curating the first Composers’ Series concert of the year at New England Conservatory. Anna Kevelson and Erika Rohrberg gave a stunning performance of my piece for two flutes, l’averse. Also on the program were works by Felicia Sandler, John Heiss, Lavell Blackwell, Robert Cogan, and Stratis Minakakis. All in all, it was a fantastic night for new music in NEC’s historic Jordan Hall.

In July and August I was in Auvillar, France, participating in a wonderful artist residency at the Virginia Center of the Creative Arts’ Moulin à Nef campus. During the residency I sketched a new motet, a Magnificat, commissioned by Emmanuel Music that will be sung on the third Sunday in Advent, December 11, at Emmanuel Church in Boston. Auvillar was beautiful and inspiring, and the time spent with fellow artists-in-residence was especially stimulating. What is more, the Tour de France came through our tiny village while I was there. 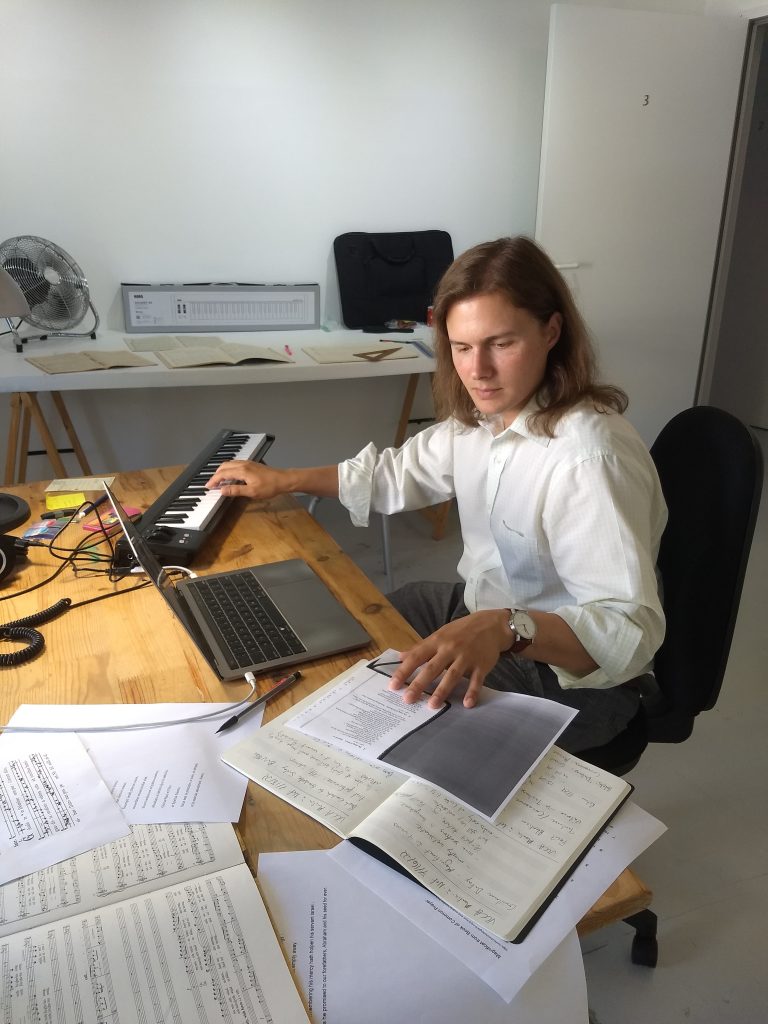 I am beyond excited to be back at Tanglewood today for the premiere of my new piece for double wind quintet, Rock Garden, commissioned by the Tanglewood Music Center! It’s being played on a prelude concert on Saturday night at 6pm in Studio E in the Linde Center alongside some amazing pieces by Gabriela Ortiz, Peter S. Shin, and Richard Strauss. All this before an incredible program by the BSO at 8pm in the Shed featuring music by Carlos Simon, Samuel Barber, Duke Ellington, and George Gershwin. Just setting foot on the grounds today is a thrill, and I’m looking forward to soaking in all the good music this week with friends and mentors. Listen to the recording from the premiere here: <a href=”https://soundcloud.com/sid-richardson/rock-garden?si=49c3a596f6104d0e85f9988bec757220&utm_source=clipboard&utm_medium=text&utm_campaign=social_sharing” rel=”noopener” target=”_blank”>Rock Garden</a>. 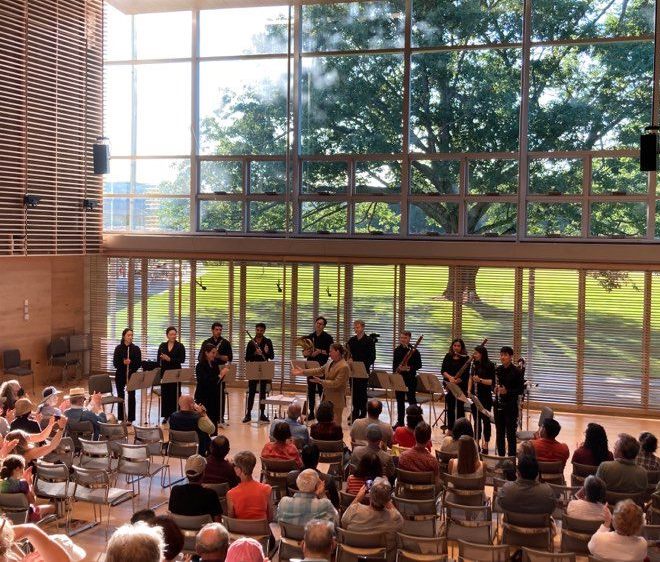 Transient Canvas performs my piece Ratyll for bass clarinet and marimba tonight at 7:30pm at The Boston Conservatory at Berklee, 132 Ipswich St. The program features a plethora of new music for this group, including works by Yaz Lancaster, Yi-Ting Lu, Brittany J Green, Mikhail Johnson, Teerath Majumder, Caroline Louise Miller, Matthew Evan Taylor, Jennifer Jolley, and Yoon-Ji Lee. The event is free and open to the public with display of a Covid Vaccination Card. You can hear their premiere performance of the piece here: Ratyll Transient Canvas.
I had a fantastic recording session with violinist Lilit Hartunian and recording engineer/producer Jeffrey Means this weekend in New England Conservatory’s Burnes Hall. We recorded my piece for scordatura violin Next Time Will Be Different that I wrote for Lilit during the first months of the pandemic. It responds to another violin solo by Kenji Bunch that uses the same tuning, Until Next Time. 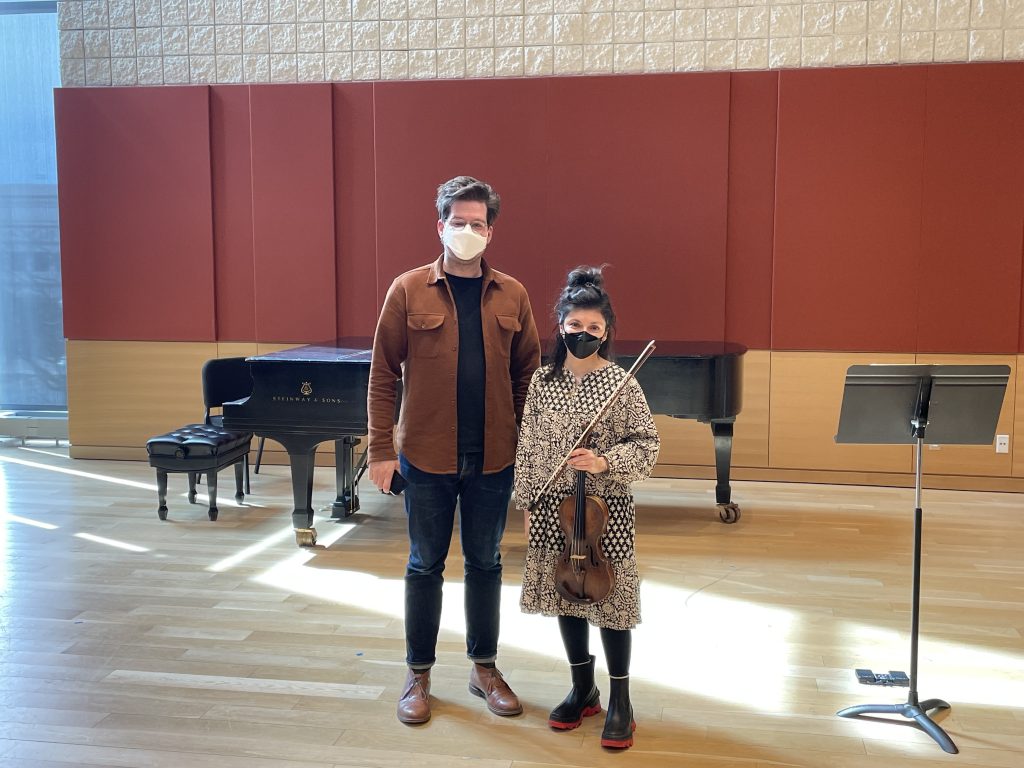 It feels like an age since I’ve had an in-person premiere, and now all of a sudden, I have two coming up back-to-back. On Sunday March 13 at 2pm at Wellesley College Deborah Selig and David Collins are premiering my new song for soprano and piano “Inscribed on a Lintel,” which sets a beautiful poem of the same name by Wellesley poet Dan Chiasson. I wrote it in memory of Magdalen Christian, our beloved music program coordinator who passed away last fall. The concert will feature the whole Department of Music in a celebration of her life. A recording of the song may be heard here: Inscribed on a Lintel. Then on Monday night at 8pm Transient Canvas is premiering my new piece “Ratyll,” commissioned by them as part of my 2021 Transient Canvas Fellowship, at Tufts University at 8pm. It was such a joy to collaborate with Amy and Matt on this piece last year, and I can’t wait to hear them play it in Distler on a bill that also features Verdant Vibes and a killer lineup of composers that I admire: Kirsten Volness, Kareem Roustom, Mikhail Johnson, and Brittany Green.
It was a great pleasure to give a virtual talk at the University of Central Florida today. It was an honor to share my music with the undergraduate composers there, and a joy to see my old friend Professor Alex Burtzos.